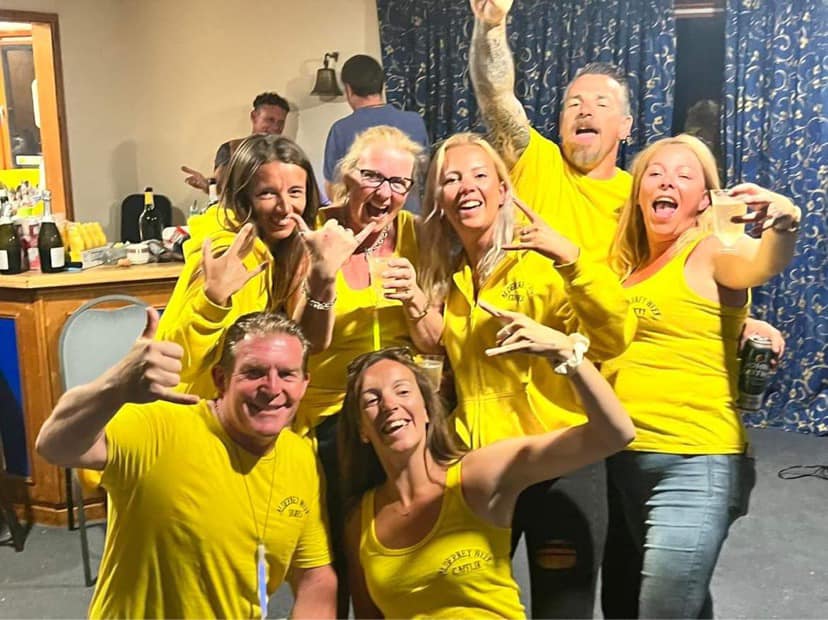 After a very disappointing and disruptive 2021 when Covid-19 seemed to rule the waves, causing the cancellation of many traditional events, including Alderney Week, this year has been a welcome relief to event for Alderney residents and visitors alike – and, not least, for the new Alderney Week Team.

In late February, Wayne & Vicky Chandler and their team announced the chosen theme “The Greatest Show” in memory of the late and unforgettable Ray Parkin, and then got down to planning and organising a bumper programme of events.

“As this was our first Alderney Week, we wanted to make sure most of the favourite and traditional events were included – albeit with some slight changes, and we also wanted to introduce a few new happenings”, said Vicky.

Ultimately, over 70 events featured in this action-packed 6-day Alderney Week programme and there was at least one big highlight event every day.

The sun came out virtually every day and the colourful and lively Cavalcade Day was a great start to Alderney Week, followed by the ever-popular Daft Raft Race, the big Water Splash, the Victoria Street Takeover with the Strong Man and Strong Woman contests, and the Festival of Colour.

The team’s decision to move the Manpowered Flight to Douglas Quay proved a roaring success, attracting hundreds of people to Braye Beach for a very entertaining and enjoyable afternoon in the sun.

The never-ending torchlight procession concluded with a stunning fireworks finale.

What a week that was – it could not have gone better and the feedback from residents and visitors alike has been tremendous.

“There was never a question of a sigh of relief with the new Alderney Week team being able to handle what is the Channel Islands’ biggest community festival as they simply stormed it with their enthusiasm and hard work and with a ton of fun thrown into the mix”, said Ronnie Cairnduff who handed over the baton to the new team last year.

“There was minimal hand holding from the old team as the ‘Magnificent Seven’ just got on with the job. There is no doubt that Alderney Week is in very safe hands for the foreseeable future with a dynamic team that will embrace it and no doubt take it to new levels”.

It’s been an outstanding success – but for the Alderney Week Team, it also came with numerous challenges and some stress. “The fact that the cargo boat arrived one day late caused a panic and put us under tremendous pressure”, commented Wayne. “It left little time for us to set up the marquee in time for the “Rock the Rock” festival which we also organise and which takes place the Saturday before Alderney Week. Some of the equipment and goods were also delayed and there was a lot of juggling going on”.

We were also faced with problems of lack of flights and shortage of accommodation for visiting performers, but were able to charter Air Alderney to bring over the Circus crew.

We rely heavily on volunteers to run the many different events, and just occasionally they were thin on the ground. A big thank you goes to all volunteers – without them we simply could not have run the show. We would also like to express our sincere thanks to all the Emergency Services – The Ambulance, the RNLI, Fire Brigade, the Police and the States Public Works for their help and support and to all the sponsors who contributed to our depleted coffers”.

And the team’s favourite events? The Cavalcade, Manpowered Flight, Big Water Splash, all the stage shows, and the last night on the Butes.

Alderney Week represents a huge boost to the island’s visitor economy, and in particular the accommodation, hospitality and transport sectors. And this year’s Alderney Week which brought many hundreds of visitors to Alderney, has been one of the busiest ever. Many have vowed to be back for Alderney Week 2023 and many have already booked their accommodation for next year.

Monday 7th to Saturday12th August and the theme will be announced towards the end of this year.

“We’re very much looking forward to organising Alderney Week 2023”, said Vicky Chandler. “We’ve been working on some new ideas and events and have already booked a few acts for next year. We’ve learned a lot this year and we’re determined that next year’s Alderney Week will be even better.”

Over 1,000 photographs and over 80 video clips of Alderney Week have now been published on the Alderney Week Flickr page for you to view, download or share. https://www.flickr.com/photos/alderneyweek20/albums